QGIS 3.0 can be extended with a wide range of functionality using plugins. While there are thousands of plugins available in the Plugin manager, it is often necessary or advantageous to create your own plugins to automate common tasks or add extra functionality to a workflow.

Since QGIS uses Python as the back-end scripting language it is possible to tie together a whole host of other packages to take advantage of tools that would otherwise be unavailable in QGIS. These features could include Matplotlib to generate graphs, charts and other plots to inset into maps or something as complex as Agisoft Metascan’s stand-alone Python module to add full Structure from Motion photogrammetry support within QGIS itself.

Understanding the Plugin system for QGIS 3

Plugins in QGIS 3 have no direct analog in the Esri ArcGIS world which can be confusing for users migrating from that work environment. It can best be described as a half-way point between Python toolboxes and ArcObjects.

Like a Python toolbox in ArcGIS, the Python language is used to underpin the logic side of the plugin. PyQGIS is the QGIS equivalent of ArcPy. Its documentation is strong and it can be used to access all of the built in features of QGIS, this documentation can be found at https://qgis.org/pyqgis/3.4/.

However, unlike in ArcGIS a QGIS python plugin requires the developer to build the user interface in Qt. Where the Python toolbox takes parameters and builds a UI with the appropriate drop boxes, radio buttons etc., PyQGIS offers a slightly more complex development process. Because the UI is handled using Qt the plugin requires a more complicated set of files and bindings to work. Simply making up a python file is not enough, the plugin needs to be compiled and configured before it can be run or shared.

Before we get into building the plugin, it is important to understand the underlying Python framework used by QGIS. PyQGIS is organized into 4 major modules:

Think of this module as the programmatic representation of the data browser and layer window.

The analysis module includes all the tools needed for data and spatial analysis. These include tools for checking topology, creating graphs, editing geotagged photo EXIF tags etc. These tools are typically used in higher level geospatial work where creation and editing of features has already been done and spatial intelligence needs to be generated. Raster interpolations are also covered in this module.

As would be expected by the name, the server module is intended to be used on a QGIS server. It is used to handle publishing services and layers as well as handling traffic and geoprocessing requests made to the server.

Since the file structure of PyQGIS requires a number of dependencies and bindings, creating a plugin requires more than just setting up a single file. The basic structure of a QGIS plugin is as follows:

This basic framework is what we call the boilerplate, or a reusable baseline common to all plugins. For that reason rather than creating them all manually for every plugin we can use another plugin to generate them all automatically, saving time and reducing errors.

Plugin Builder generates all of the necessary boilerplate files for a new plugin by taking the user through a set of dialog boxes. 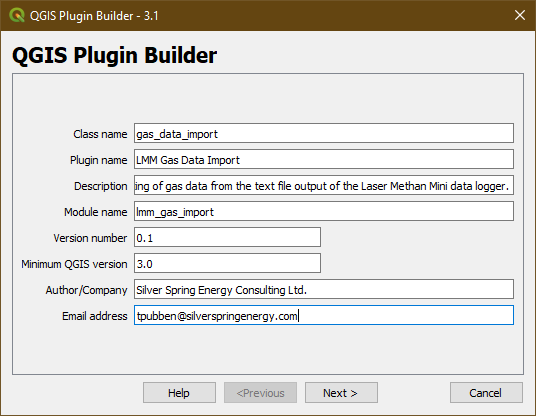 Class name: The name of the class within the module you are about to create that contains your code.

Plugin name: This is the plain text name for the plugin you are constructing

Module name: This is the name of the python file you will be creating

Version number: arbitrary, start versioning from 0.x until your code is production ready.

Minimum QGIS version: specifies what the lowest version of QGIS is that is required to run the plugin.

Author/Company: your name or company name

Email address: address where you want questions relating to your plugin directed. 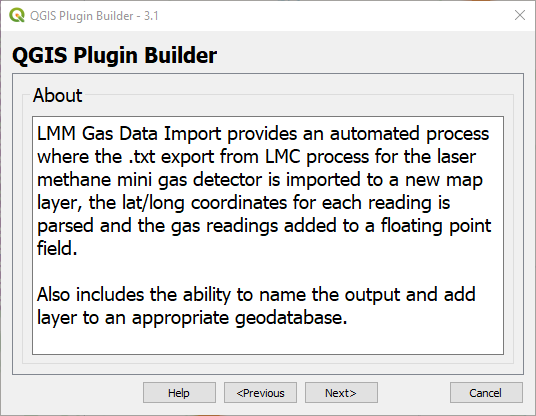 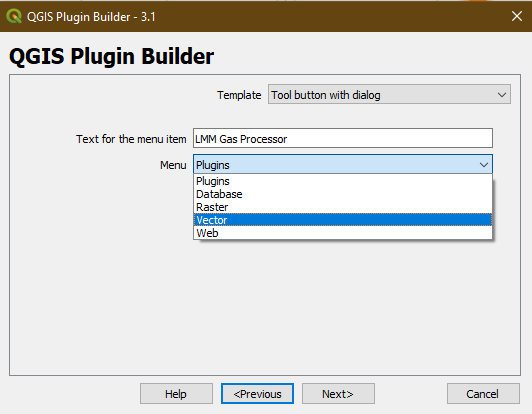 Create the text you wish to have show up for the menu item and select which menu you wish the plugin to show up in when installed. Default is plugins, but other menus may be more suitable. 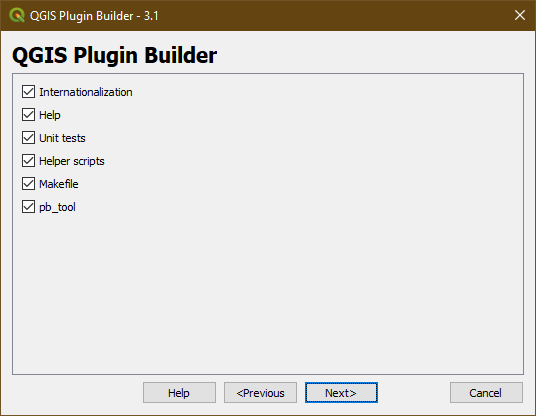 These are optional files to be created with the plugin. You can skip all of them but it is recommended you keep the pb_tool file and the help file as they are very useful. Pb_tool allows easy python compilation later on. 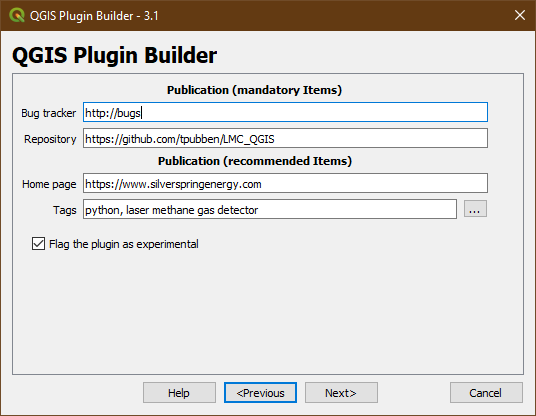 It is recommended you add a URL to your github repository for this plugin as well as contact info. 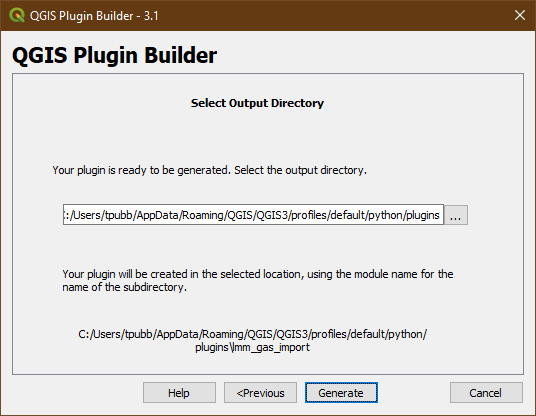 Selecting an appropriate directory to create the framework is important but not essential. In Windows, QGIS looks for plugins in the following folder:

It can be useful to create the folder here to prevent moving it at a later time.

You may get an error indicating that pyrcc5 could not be found and that you must manually compile the resources.qrc file. We will go over that next. 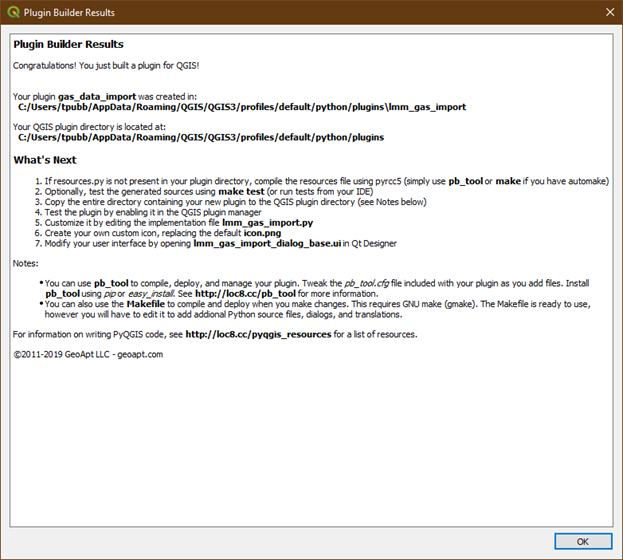 Once your plugin has been created a results window will open and show where the plugin was created and the relevant information on what to do next.

If you received the pyrrc5 error when generating your plugin in Windows, it is a simple fix by creating a Windows batch file.

Navigate to the folder where you created your plugin in Windows explorer. Once there create a new text file named “compile.txt” and change the file extension to “.bat”

Depending on where you installed your QGIS application it could be in a number of different locations. If you used the Version 3.4 Standalone installer it will likely be in:

If you used the OSGEO4W installer it may be in:

Right click the compile.bat file and select “Edit”. This will open notepad. Paste the following into the file, changing everything inside the square brackets [] with the path to your QGIS installation.

The square brackets are placeholders and do not need to remain. If your default path is the same as this tutorial’s the file would look like: 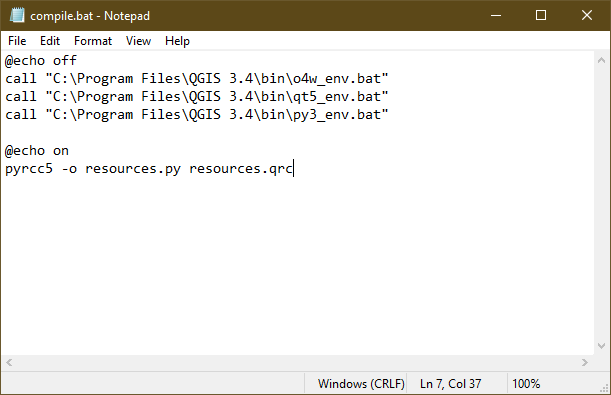 To run the compiler, simply double click the batch file you just created and everything should run. A new resources.py file should show up in the folder.